Dogs cannot speak but they have many means to communicate and express themselves. The bark, howl, or moan is a verbal communication system that we know well enough, as well as the movement of the tail, or the position of the ears. Your dog licks you because of an expression of affection, an invitation to play when your dog wants to have fun and get some pampering.

Read more: How to groom a dog?

Licking is one more of these means of communication in the following article we will show you the reasons why your dog licks you:

1. Lick people to get to know them

The smell is their strongest sense. They also learn a lot from what they perceive through taste. Licking the mouth of another dog can indicate if there is food nearby and this behaviour can do it with you as a way to ask for food. The taste of a person conveys a lot of information such as their chemical composition (hormones and other chemicals in the skin), their health, and their mood. That is why in the dog greeting they lick each other and they also lick with humans. If you taste something delicious, the next thing is to ask you for food.

Read more: What sound does a dog make?

3. Licking as an act of submission

Licking is also a sign of respect and submission for dogs. They lick other members of the pack or social group to show their acceptance of the rank. Dogs also show respect when they lay down and lick your feet, it’s probably his way of showing respect. For him, you are the leader of the pack and as such you have to guide him and teach him how to behave.

Licking, licking, or licking you may find relief from your anxiety. If you think he may have any type of anxiety, consult your vet. You can also use a series of relaxants to help them with their problem.

5. He licks you because he loves you

Most licks are signs of affection. Canine mothers lick their puppies to clean and stimulate them, so it is one of their most important social cues. That is why he can lick your hand when you enter the house as a token of affection and lick you after caressing him, he returns the friendly gesture. Two-way communication to learn to communicate with your dog is essential in the relationship between human and dog.
Do dogs transmit disease through licking?

Read more: How to stop whining in dogs?

Yes, dogs can transmit various bacteria, such as Pasteurella multocida. Although intestinal parasites are transmitted mostly through faeces, if the dog has licked its anus before and licks the human’s face soon after, it may be transmitted in this way. Contact with the mucous membranes should be avoided so that the dog cannot transmit germs that can cause illness. Affected quadrupeds show no symptoms of the disease, but they can infect humans. In the worst case, it can lead to blood poisoning or meningitis. It is very rare for an infection to occur. But, if a dog has licked your hands, you should wash them before preparing food or rubbing your eyes. This rule is very important, especially for people with a weak immune system and for children. 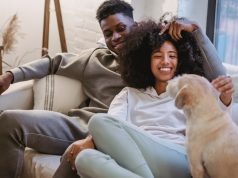 How to Get a Service Dog?

The Best Probiotics for Dogs